Why we love Burpees (no, really)

By Train Together 7th April 2016 No Comments

Ever done burpees? Or 50? The burpee has to be the most moaned about exercise out there. It’s hard. Really hard. That’s because, in effect, it is the combination of at least 4 different exercises. So, why do we make you do them?  Burpees are amazing (no, really they are) and unlike some exercises, they aren’t restricted to a particular style of class. You can do them as part of a Circuit, HIIT class or Boot Camp. Even in Spinning, we’ve heard of trainers dropping the class to the floor for 5 burpees mid-cycle (just thank us Kev hasn’t tried that yet!). Done right, burpees are tough but extremely rewarding (it’s truly a love-hate relationship) and let us tell you why…

What is a burpee?

The burpee is a single, explosive exercise that basically combines squatting, planking, pressing and jumping. Step by step, the burpee goes as follows:

Other variations add a push up mid plank – but this is optional!

So, where does it come from (not hell, in case you were wondering)? The burpee was actually invented by physiologist Royal Huddleston Burpee in 1939, who created the exercise as a form of fitness test. Back then, however, you were only ever required to do 4 burpees (no doubt our trainers will have you doing a lot more) and the original burpee wasn’t as tough as it is today. In fact, R. H. Burpee had you miss out the press and jump altogether… Simpler times. The burpee went on to be used in the army, putting upcoming soldiers to the test. Rumours have it, for success, soldiers had to perform 50 burpees non-stop. Sound easy? It might if you’ve ever completed the 100 Burpee Challenge. However, they say that 12 burpees in 20 seconds was considered just a good level of fitness (now THAT sounds difficult!). 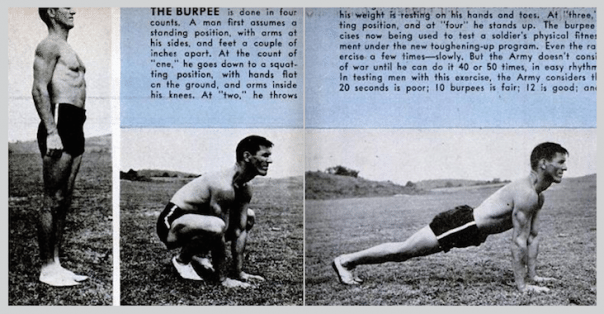 Why do we do them?

The burpee must be one of the most effective full body (arms, legs, core and backside) exercises out there. It uses many of the large muscle groups including quads, deltoids, glutes, hamstrings, triceps, abs and calves:

We might moan about doing them but burpees actually tick off all 5 dimensions of fitness: speed, agility, endurance, flexibility and strength. Better yet, they do wonders for cardio vascular fitness – just try doing 10 burpees in a row and check your heart and breathing rate! As king of the all-rounder exercises, burpees give you the opportunity to measure your fitness improvements. After just a few weeks of burpees, you will start seeing some huge differences to your overall level of fitness. And don’t forget, burpees don’t require the use of any equipment. Basically, you can do them anywhere – they give you NO excuse not to workout because, where burpees are concerned, you are carrying your gym around with you.

© 2020 Train Together. All Rights Reserved. Web Design by Urban Attic.

This website or it's third-party tools may use cookies, which are necessary to assist functionality and required to achieve the purposes illustrated in the privacy policy. If you want to know more or withdraw your consent to all or some of the cookies, please refer to the privacy policy. By closing this banner or continuing to browse, you agree to the use of cookies.Accept & Close